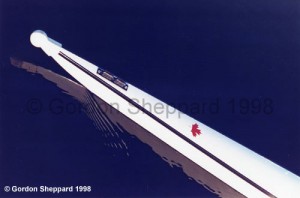 In May 1997, a friend invited me to the annual dinner of the McGill University Rowing Society. It was a festive evening, full of song and mirth. As we said goodbye, the rowers invited me to attend their training sessions that summer, to be held weekdays at the Olympic Basin on Montreal’s Ile Notre Dame from 6 a.m. to 8 a.m. and from 5 p.m. to 7 p.m, dramatic hours in which to take photographs if the sun is present. As these young men and women intrigued me, and I had long been fascinated by the rowing paintings of the American Thomas Eakins, I accepted the invitation.

Over the next three months, I went to the Olympic Basin a dozen times, shooting with my Nikon F5 35mm camera in both black and white and colour, with various film stocks at different speeds and from many vantage points, trying to capture the excitement of being a rower — the rhythmic unison needed to produce maximum speed over a limited distance of water, the lilt and cleaving of the sculls, the straining of muscles to exhaustion, the flash of sunbacked spray flying from the oars.

When I finally took a good look at the photographs some months later, I saw that what best rendered the experience of rowing were slightly out of focus images taken against the sun. And when I began working with these images in the darkroom, I realized that large-scale prints would offer the public the best chance to participate in the emotion of this experience.

For me, one of photography’s chief — and little explored — attractions is the different versions of an image that can be made from the same negative. I find these various interpretations can provoke the kind of visual haunting that an observer gets from Monet’s different takes on the same subject, as in his paintings of haystacks or of Rouen Cathedral. That’s why I made at least two versions of each of the images I selected to convey my experience of rowing in the summer of 1997.

I haven’t yet decided on how I will frame The Rowing Pictures. 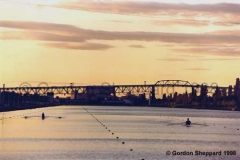 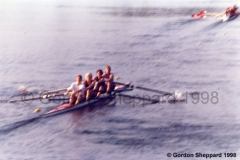 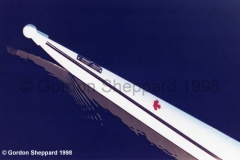 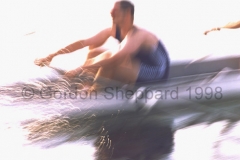 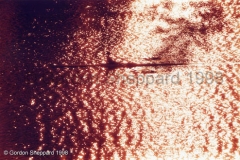