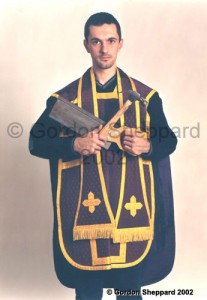 Twenty-five years ago I began collecting vestments worn by Catholic clergy. I had no idea what I’d do with them. At first I bought vestments in antique stores; then in the 90’s I discovered the wacky world of auctions, which is where I purchased, among other things, white under-vestments that once belonged to Cardinal Villeneuve, the feared potentate of the Catholic Church in Québec in the 1940’s.

A year ago, while looking at Mikhail Altantchev, an attractive and spiritually gifted young man who’d been helping me since the summer of 1995 with home renovations, computer maintenance and programming, printing in the dark room, and designing my book HA!, it suddenly occurred to me that he looked like a saint. At which point, it also occurred to me it would therefore be appropriate to photograph him wearing a religious vestment. I asked him and he agreed. I then had another idea: that he hold something that would represent his work or passion. Since he was then working as a construction carpenter, he suggested a hammer and saw.

I wanted to take this portrait in studio using a Linhof camera whose 4″ x 5″ negatives offer arresting detail. And when taking the photograph I decided to cut the lower part of Mikhail’s body just below the knees. This would make his height undecipherable, and therefore not limit him physically. As well, not being able to see the feet would add to the impression that he was a spiritual being.

I found the resulting portrait of Mikhail so compelling I decided to continue taking similar portraits of friends and acquaintances — while holding to one rule of selection: all the subjects had to be Quebecers. Why? Because the basis of our culture here in Québec is the Catholic Church. So having Quebecers wear these vestments is a way of making visible what is invisible: namely, that all of us who live in Québec are culturally Catholic — and that applies to everyone, whatever his or her origin or religion.

To complete an exhibition of these portraits, I intend to photograph at least two dozen subjects. 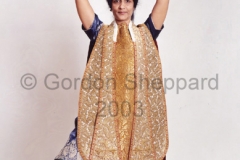 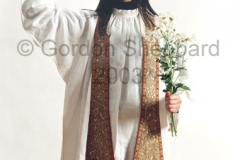 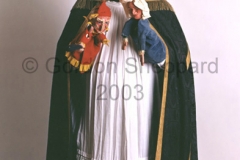 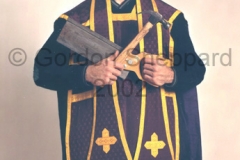 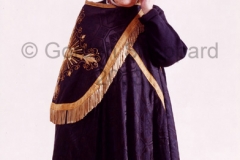