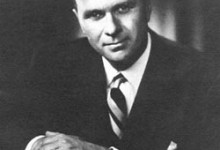 We are here today to say farewell to a remarkable man who touched all our lives.

Who was this man, Harry Sheppard, born in Toronto almost 75 years ago, at the beginning of winter, and who died this week, at Thanksgiving?

The business associate says: “He was tough but fair. He might take you apart, but he always put you back together again before you left his office.”

The civic leader says: “I never knew a man more public-spirited, more involved in the community.”

The farmer says: “What I liked about him was he would always tell you straight out if there was something bothering him, and then he’d listen to what you had to say.”

The friend from boyhood says: “What a deeply religious man he was. I doubt if Harry ever sinned like the rest of us. If he had any sins, they were well-hidden.”

The granddaughter says: “Baba was so special.”

The brother says: “A nicer guy never was.”

The wife says: “There was no one like Dad; he was always such a gentleman.”

I remember the businessman, handsome, charming, successful, who went to work at 14 to support his family, at the end of the First World War, and became President of IBM Canada at the age of 41, at the end of the Second World War. And then in the next few years, swiftly, came new responsibilities, new honours, and more came for many years until, when sickness forced him to retire in 1970, he left behind him a brilliant record of achievement in Canadian and international business life.

Remarkably, through it all, unlike so many successful businessmen, my father did not grow cynical or vain, or pompous or hard-hearted, or hard-faced. In his business dealings, as in his personal relations, he tried to be fair, honest, loyal, considerate, treating everyone with an integrity that honoured the Golden Rule; and as a result, those who worked with him revered him. What an energy and what a faith in his fellow man it must have taken for him to try to put his Christian ethics into his business practice; and, amazingly, to succeed.

I remember too the man of social commitment, the responsible citizen who believed that the fortunate should help the less fortunate, that those who command should also serve, that business leaders should be community leaders. And so he worked long and hard on behalf of institutions and organizations concerned with our health, education and welfare, giving counsel, raising money, getting it going, getting it done.

And I remember the private man at play, happy to be among men, sitting in a leaky boat swinging at anchor off a likely rock in a Northern Ontario lake in July, the hooks baited, waiting for a strike, a fresh wind whipping the waves over the deadheads, a loon’s cry echoing into the pines, remembering breakfast, looking forward to dinner, the enjoyment of nature and the special camraderie of fishermen the real reason for being there, brown bass the excuse. My father never caught a lot of fish; I don’t think he really wanted to.

And I remember how keenly he enjoyed the fellowship of the hunt, as he went riding in red over the stubbled fields and through the autumn woodlots of North York, riding on well-loved horses named Vanity or Bruce, riding to hounds in full hue and cry, taking fences, taking chances, winded, bone-cold and bone-tired, glad — glad to be “gone away” among friends.

And then there was the man alone with himself: alone at a Haliburton beach in summer, always swimming sidestroke, his head always above water, swimming slowly back and forth as if forever, emerging to lie back briefly on the sand, eyes closed against the hot sun, replenishing his energy, restoring himself; or alone at his farm in winter, walking snow-gusted fields or new-plowed roads, head bowed against the wind, walking briskly, his hands, gloved and swinging, giving rhythm and purpose to his exercise, a determined silhouette; or alone before the hearth at the home he built, staring at the birch logs burning brown, his clear-blue eyes alive with fireglow, lost in thought, assessing the past, planning the future, his body still, his mind never.

And I remember the devout man who went to church regularly and helped the church run its affairs, not for show but for witness. Religion was not an afterthought or a palliative or an insurance policy for him. His faith, fostered when a boy by his beloved Irish Protestant mother, had a firm foundation. Even when, after a lifetime of exemplary Christian faith and action, he was struck down by disease, and then deeper struck down as the disease fouled his brain, broke his speech, wracked and crippled his body and disfigured his face until he must have felt like crying to God, as did Job: “Thou are become cruel unto me… thou opposest thyself to me” — even then he did not lose his faith, but took Communion in his hospital room and did not desert the God who seemed to have deserted him.

And I remember the father, kind, devoted, interested. My sister and I were not an afterthought: he always took us seriously, for he was sure of who he was; and so, unlike many parents who are themselves still only children, he did not push us to complete him, to become what he might like to have been but was not. He didn’t always understand us — God knows I mystified him — but he tried to understand nevertheless; and while doing so was generous with his time, his money, and his energy, anxious to help us to get where we were going; anxious, I think, to learn from us, for he remained throughout his life, like all great spirits, an avid and vulnerable learner — even at the end when he could only communicate fitfully, in a whisper. It’s true I was never able to win him to my seemingly radical vision of the world, but I put that down to my inability to persuade rather than to his refusal to learn.

And there was something else, a gift so rich and rewarding that I remark it with a special gratitude: by his warm example, he taught me to be unafraid of affection, to welcome affection, to be generous with affection. Because of him I am in touch with life, in touch with the world, able to embrace men and women freely in fraternal enthusiasm without embarrassment or hesitation.

So my handsome, charming, successful father has not haunted or harried me. Rather, he has been a comfort and an inspiration and a friend.

And finally I remember the husband, well with his wife, his intimate companion, his helpmate in time of triumph and of trial. Evelyn, Ev, his first love, his best friend, she who was what he was not, as she was not what he was, a fine match to brave the world. He married her in 1931, two years after he joined IBM and, perhaps not surprisingly, in the end she proved to be more faithful than the company. And though I’m certain he truly respected and appreciated women as well and wisely as any man I have ever known — and they knew it and responded — he loved only his wife with full faithfulness, in a union that began in a United Church basement. How well he had chosen he knew with awful certainty during the last fifteen years of his life as his greedy disease mocked his spirit and beggared his body and he grew gaunt and grey groping into the ruin of second childhood, for all through those years, as he fought fiercely to live, his wife cared for him body and soul, day in day out, her spirit fastened to his, willing him to live as long as he would or wanted to, or God decided. This was an abiding love of amazing grace that even death cannot put asunder. Now her long vigil is ended. And you hope that as she stands by his casket to bid him farewell, and says, as she has so often through forty-eight years of marriage, but now for the last time, says softly, simply, “I love you hon”, you hope he will hear her.

Yes, his fierce struggle is over. The light has gone from his surprising eyes, his breath is still and he is silent. He has gone beyond, and all of us, for our different reasons, know our loss, not only of his fellowship, but also of ourselves, for with him into the silence of death he has carried a part of us — what he knew of each of us, what we were to him. And yet we can find solace in the knowledge that what he was to each of us lives on in us, and thus does he live on, through us.

Now, celebrating his life in death, we say goodbye to this good man, this righteous man, this noble man, this gentleman. Farewell, Dad, au revoir. Until we meet again – on the other side of silence.